A downloadable game for Windows

Important: Originally released in 2018, this is just a small update mainly done to release here for the first time, if you purchased it before you can update with your previously purchased link, for more information read here:

Play as Vena, a young girl whom by chance, or maybe fate, meets a supernatural creature known as the guardian, who grants her its power in a mutual pact to help each other, help Vena rescue her friends and help the guardian end and evil presence full of lust and perversion plaguing an old abandoned mansion.

An action platformer with exploration elements where you navigate a maze-like mansion while fighting ghosts that give you orbs to upgrade your stats in a lite RPG fashion; through exploration find keys and abilities to keep moving forward, and pieces of information to help you piece together the history of  the mansion.

You can find fan translations to other languages here.

Current version is 1.10 b (If you already have 1.10a you only need to redownload if you use custom translation files, otherwise there are no other changes)

Feel free to report any bugs or glitches you enounter.

In order to download this game you must purchase it at or above the minimum price of $5 USD. You will get access to the following files:

can produce an Android version? I could pay for it!

Would recommend anyone who hasn't already to get it.

Will there be a sequel?

not likely, I have other ideas I would want to work on before thinking about a sequel

Could there be a possibility to play the other characters? (after completing the game of course). Especially Rika (the blonde) and maybe even the Redhead (the 'real' ghost hunter, storywise).

Nope, this game was finished around 4 years ago, extra content at this point is not an option, besiedes it would be almost an entire new game of extra work.

what is difference between normal and extra game?

only difficulty, it's harder.

No, you have to save at the red pillars.

Hello, I'm having a small problem, I wanted to continue the game where I left of but for some reason I can't pass any doors, when I'm in front of doors the character doesn't go though but instead crouches or jumps

Are you still having this problem?

yes, I'm still having this problem, currently I decided to just take a break from it

Didn't you by mistake maybe changed the controls? try setting controls to default in the options menu.

any chance we could get a linux version to use on the steamdeck?

Yes, it only works in certain parts required by the story, I think later on after certain point there are no restrictions, I think, honestly I don't rembemer. I'll have to check.

After the fall, how do I get the skeleton head?

You have to defeat the ghost using it.

Make Android version please i will buy it

Not in my skill set, sorry.

Hey Vosmug, just wanted to say this is a great game. I played this several times ages ago (I payed for it lol), and it's top notch stuff. Looking forward to your next game!

Thanks, still working on the next game.

any screenshots of the next game, btw super excited you're 100000% my favorite H-game maker. the gallerys are amazing

You can check (old) development here:

Also look for a discord link in the comments of the last post if you're interested in more.

Yo, can you send the Discord link? (If it's finished that is). PS- Love your work!

i cant play the game the file data.win cant be extracted so it wont load the game what do i do to fix this?

In some of the promo pictures there are some pixilation, and I was wandering if that was also the case in the game?

No, those are pics taken from the japanese version which does, also, I was under the impression the front page needed some censorship, which I think is not true, but the game itself doesn't have.

Will this be on steam?

Hello, dear developer. I am not sure of the accuracy of what I have written since I am copying from the translator. I would certainly like to play your game, but there is a problem. Cards of many banks are simply not supported in itch.io . This is all sad, of course, but maybe there are alternative ways to get your work of art?

Maybe you can try DLsite.

hey Vosmug, you have no obligation to answer this because it is not a bug report or anything, but, could you tell me what each of these symbols on the save file mean? I've been curious since I got this game back in 2020 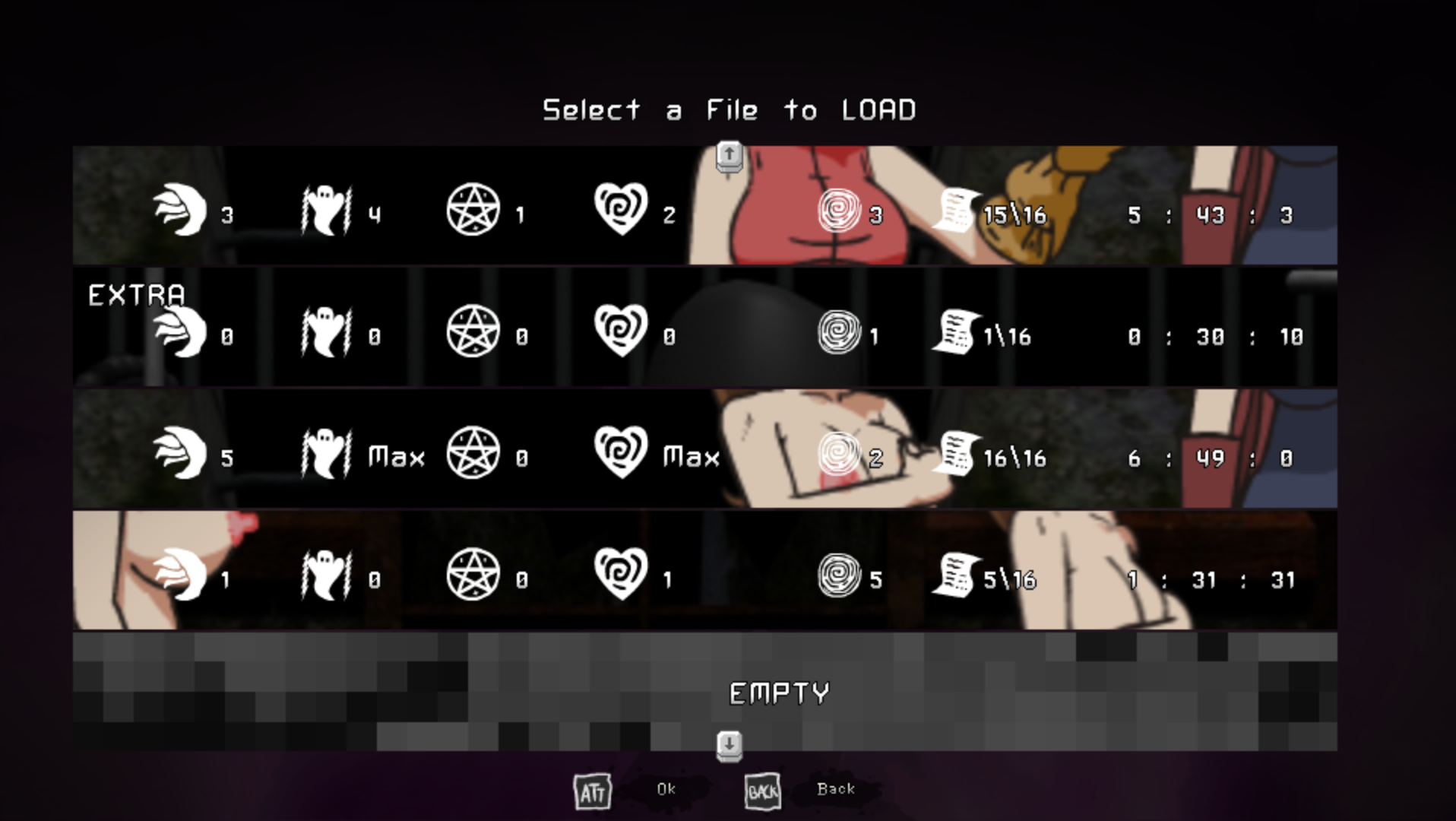 It's not very clear I guess but those are the stats you upgrade, in order, attack, stun, time and regen, then the number of orbs you have at that moment, which is useless to count since you're supposed to spend them anyway, and at the end how many diary pages you have collected which I guess you already knew that one.

Honestly is kind of pointless to show those stats there but I thought it was cool, like a JRPG save slot, playtime and diary pages are the only useful information.

Those are good numbers, I'm glad you enjoyed it enough to play that much.

Would there be a possibility of compatibility for Linux?

Probably not, best thing to do would be to use a virtual machine.

Well, per virtual machine the performance ends up being horrible. It could run via Wine, which is like a "Windows emulator", but I'm not sure if it will run without texture blinking, bad sound and etc, as it's a paid game I won't waste money to test it lol. Anyway thank you.

I still have version 1.08, how do we download the latest version?

If you got it from itch or dlsite just redownload, it you bought it from me previously, email me with your details and I'll sent you your original purchase link again, follow the instructions in the first link at the top.

Well.. i just wished the spirit gallery could have some sounds.. but i am TOTALLY satisfied with this game and xenotake.

I'm waiting for your next project. Lunar! Please come back quickly!!!

Hello. I just purchased your game and upon starting it up for the first time after extracting it, It crashed my computer 10 seconds into the intro. After I rebooted and tried to run the game again, I was almost immediately met with the save game menu (also with brief flashes to the NEW GAME screen whenever I tap a key) and a dreadful sound bug of what sounds like constant repeating effects. I have tried reinstalling the game and rebooting my computer several times to no avail. pls help

I don't know if I can help, never heard something like that before, dosen't sound like a game problem but a system problem.

If you share more details maybe someone else can help you, operating system, PC/laptop specs, etc.

I was wondering "I have seen this type of art before" I bought Xenotake like when it released on DLSITE heh, gonna buy this game of yours too, you are telented, are you retired from adult stuff tho?

I've been working on my next game for a couple of years now, here: https://vosmug2.wordpress.com/

This is a very unique art style! Huge props to the author, I've been looking for games with a similar aesthetic with an adult theme and came across this one, and It did not disappoint <3.

any chance of a sequel?

Not likely, this was a one-off and I have no plans or ideas for sequels.

I think I played this back in the days of Flash… Did this start as a flash game, like Castle Crashers did?

I don't think it was this game, this one was released first in 2018, maybe I released a demo in 2014 or 15 or so (it took 4 years to complete), so if you're talking around that time then maybe you played it, but it was never a flash game.

I recognise the title, the female character, and the gauntlet.
I also remember playing the very beginning of the game, very vaguely.
When I get some extra money to spare, I will consider buying it if I can.

You are correct, it is not Flash. I had been downloading various flash games when I originally downloaded it, some of which were converted into exe files. (I wish a lot more Flash games did this. Yes, I know it limited them to Windows… but now that Flash is dead, so are a ton of flash games that were never ported to console… now trapped as swf files that even flash emultators don't correctly run… I miss the flash games that never made it into the massive archive of flash games that were lucky enough to be preserved…)

Since GHV - demo 0.1.1.exe was barried in the depths of my flash folder (animations, games, music videos…), I must have mistaken it for a converted flash game.

What engine or code was it built in so I can put it in its correct place?

On a side note, I have no idea where I got the demo. Maybe Newgrounds, if you ever uploaded it there…

In any case, I'm glad it was finally released; even if I missed the début.

It's made in Game Maker, I always posted it in my own blog and I guess someone reuploaded it somewhere else.

If you have SWF files, you can download the desktop Flash Player Projector:

Then drag the files into it or set it to launch the projector when double clicking SWF files.

I was not aware adobe still offered flash support at all.

There is one that the standalone player won't work for, that I know of. It's kske or something like that. It's just a K-On paper doll game, but downloading the swf never worked, there was something on the site that made it work… some form of DRM I'm sure.

Regardless, thank you; I will try to check the link when I have sufficient PC access again.

Will there be an android version of this game?

I understand the difficulties of coding, as in it's a lot of work but maybe someday for android. Will it be free here at some point?

Make sure to use the left-hand keyboard functions for controls. WAY better experience. Once I learned about the controls remapped this way the game was super good and enjoyable. I'd recommend it 8/10. I wish there were double ghost scenes though tbh. Combinations are what make these great!

Learning how the map function worked was a pain, in short use your finger and place it on the ladder or UP/DOWN icon you're looking at then use the arrow keys to scroll through maps. Where ever your finger is after you scroll the map will be the end location of using the ladder. 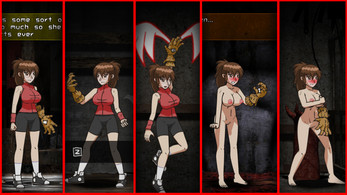 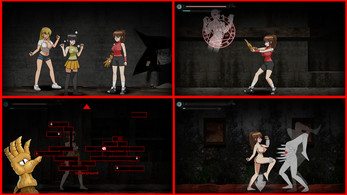 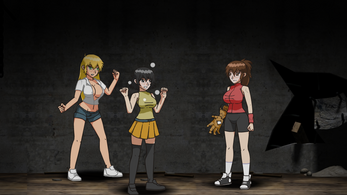 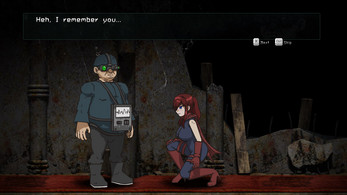 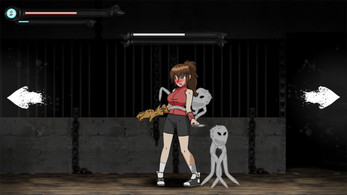